An Introduction to the Love of my Life - Jyotiraditya 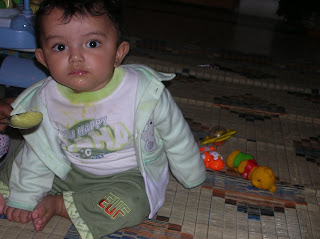 My blogger friend Ramesh suggested that I should introduce the little guy in my profile pic. I've taken this feedback seriously and so you are reading this post about my son, Jyotiraditya.


The First Word is...
Well, to begin with, I'd like to introduce the little guy. I owe it to the little guy. His first word was 'Acha' meaning 'Father' and I can never stop loving him a million times more just for that single timeless milestone in his phase of development.

When I was going to become a father, I was so sure that I'd be lousy at it. I hated kids. I didn't know which planet they were from, always creating trouble and making a mess here and there. Even before my son was born, I was cribbing that i will be a terrible parent because I don't know the first thing about expressing love to a kid.


Respect Your Kid
Looking back now, every one who remembers me then makes endless fun of me. Adi is my life, the very purpose for which I live and find joy in everything I do. treat my kid with a lot of respect. I listen to his opinions and tell him to see the other side and the funny thing is that he is open to it and does see the other side if I suggest it.


Be Best Friends
What I love is that he and I are best friends. He talks with me when he is happy, angry, upset or anything. When I sit down to pray, I tell him to join me. I would like him to join me but if he doesn't, I will not insist or force it. The moment you force such beliefs on to children, they will resent you for it and never totally open themselves to its real essence.


Cuddle Up
He talks to me about his day and won't go to sleep if I am not there to cuddle him. He calls out for me in his sleep and I hold him tight so that he knows that I am always there for him. He is a big part of my heart but maybe I'm sounding very cheesy like a crazy dad.


As parents, I've thought seriously about my role in my son's life. Yes, it's limited. Here is my perspective. We are meant to safeguard the treasures that we are blessed with.  A gardener who looks after flowers spends a lifetime nurturing them but he doesn't keep them for himself. Those flowers are meant to travel to distant places, gather new experiences and add color and joy to those they visit. The same applies with our kids whom we proudly display as 'ours' to the whole world and we mistakenly believe we own them.


Don't Stifle a Kid with Endless Rules
Too many parents stifle their kids with rules about everything. Rules are fine to a reasonable extent but kids are kids. Give them space to learn and to make mistakes. Don't play with the boys who aren't from well-to-do families. Don't do this, don't do that. Just like laws stifle us, as ordinary people, a lot of these senseless rules that parents follow stifle a child's development and stunts his/her perception.


Stay Connected to Love, not Clout
I see a lot of parents who flaunt their wealth and connections to get children what they want. Perhaps there is nothing wrong with that. But I don't ever intend to do that because that's what my father taught me. Despite his position, he has never used it to promote me or get me something that is beyond my reach. He has always taught me to work harder than every one else if I want to succeed at something.

If my son asks for something that is either not right or not within my reach, I tell him that honestly. It's my father's legacy. Besides, I don't want to build false expectations in his mind. I don't want to be a perfect parent. I just want him to accept me with all my limitations too. And yes, if I start bribing my connections to get things done for him now, I am giving him the wrong signal that will become very dangerous for his own future when he grows older.

I want my son to achieve his dreams but with his own hard work and not because I have the clout to get it done for him. I am not too thrilled that he munches on Lays and Cheetos all day or that he loses his temper too fast (like me) and that he is very blunt about nearly everything but when it comes to the individual he wants to become in life, I will support him, help him reach decisions that are ultimately his and take pride in the fact that even when he's made his share of mistakes, he's learned to be confident to take them, no matter what.

That's what I want for my kid. Now, tell me your perspective.
Posted by Sanand at 8:48 PM

I can see from your post how you dote on your son. For me, I try to say no to very few things, so that when I actually say no, my daughter takes some notice.